Should the City of Toronto step in and buy what may be the oldest tree in the city? 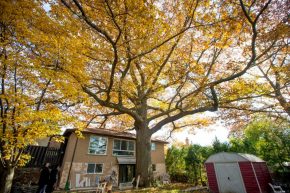 The red oak on Coral Gable Dr. may be up to 350 years old, and is designated by the city as a heritage tree. (CARLOS OSORIO / TORONTO STAR FILE PHOTO)

It’s a 300 year old red oak and it’s on the property of a home in the Sheppard Avenue and Weston Road area.

The tree stands about 24 metres tall, with a circumference of about five metres and expansive branches which measure nine to 12 metres in every direction. It also cups the foundation of the home with it’s roots. And that’s the problem. The real estate agent for the homeowner says the roots are threatening the structural integrity of the house and represent $60,000 to $80,000 in lost opportunity for the property owner.

Khaled Elsayed says he plans to put that price plus the current value of the property (about $750,000) to the city which he says expressed interest a few years ago in purchasing it to preserve the tree. He says if the city is no longer interested, the homeowner plans to chop the tree down.

A city spokesperson says the oak is designated a heritage tree and is protected under the municipal code, which requires homeowners to get approval from council before chopping it down.