Toronto’s Police Chief says he’s trying to mend the relationship between his officers and the city’s LGBTQ community. 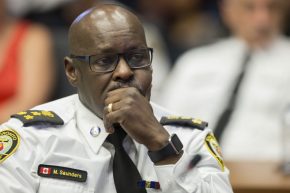 Mark Saunders says the application to have uniformed officers march in this year’s Pride parade is in.

“We know that elements of trust were compromised and strained as a result of the recent past, and that has been my primary focus,” Saunders explained.

Toronto Police were allowed to attend last year’s Pride Parade so long as they did not dress in their uniforms or appear in cruisers. At the time, members of Black Lives Matter called on uniformed police to be excluded from the parade saying their presence made LGBTQ black youth and other members of racial and sexual minority groups feel unsafe. Chief Saunders said then, the service would respect the demands and not participate.

Since then, residents of Toronto’s gay village say tensions are worse amid the investigation into alleged serial killer Bruce McArthur, who’s charged with killing six men with connections to the Church and Wellesley area.