As students were returning to school this morning, the City of Toronto announced several new initiatives to improve road safety and to enforce the message “slow down Toronto” in school zones. 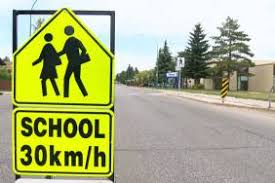 The initiatives are part of the City’s $86 million “Vision Zero Road Safety Plan” and coincide with a Toronto Police school zone safety campaign.

The Mayor launched the campaign this morning at Cornell Junior Public School in Scarborough.  He said “The safety of all pedestrians, but particularly children, must be a priority as one pedestrian death is one too many.”

The measures planned for the first quarter of 2018 include the two-week “Slow Down Toronto” campaign in school zones, a one-year pilot project to provide new flexible in-road traffic calming signs in 12 school zones across the city and retrofitting 80 schools in 2018, up from original plans to retrofit 20 schools annually.