U.S. President Donald Trump has reportedly told a dinner gathering of donors that he made up facts during a meeting with Prime Minister Justin Trudeau.

A recording of a fundraising speech Trump gave in Missouri Thursday night has him boasting that he “had no idea” if the U.S. had a trade deficit with Canada when he insisted to Prime Minister Justin Trudeau that was the case. 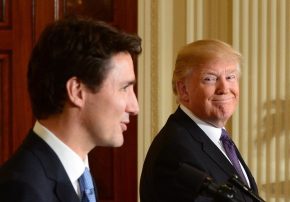 The story is published in The Washington Post, and says when Trump had someone check, Trudeau was correct. But he went on to say that if you include energy and timber, the U.S. loses $17-billion a year. But that also does not appear to be true. A recently released 2018 White House Economic Report of the President prepared by Trump’s own team and bearing his signature states that the U.S. ran a $2.6-billion trade surplus with Canada.