ELLIOTT CONCEDES DEFEAT TO FORD, WITH PC'S POISED TO WIN NEXT ELECTION ACCORDING TO NEW POLL

After initially disputing Saturday’s incredibly close election, Elliott released a statement Sunday evening saying she is now confident in the results. In fact, Elliott and Ford met last evening, and Elliott congratulated him on his victory. Elliott also said in her statement, she plans to run as a candidate for the PC’s in the upcoming provincial election. 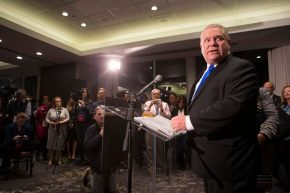 Doug Ford had a busy first day as the new leader.

“I’m just getting out there, meeting with the executive, meeting with different groups and just coming up with a great game plan to move forward and run a great campaign,” Ford explained while making the rounds on Sunday.

Reaction from the other provincial leaders on Ford’s victory is much the same. Both Liberal Premier Kathleen Wynne and NDP leader Andrea Horwath say a vote for the PC’s is a regressive move. Horwath says the Conservatives are wanting to “drag our province backwards” and Wynne says “their platform would take billions of dollars out of services, out of our education system and out of healthcare.”

Meantime, a new Forum Research poll of Ontario voters suggests 48 percent of voters in this province disapprove of Doug Ford, but the party is still poised to win a majority on election day.