The founding document of Alcoholics Anonymous, known as The Big Book – is heading back to auction – after a lawsuit disputing its ownership was settled.

The manuscript and manifesto is going up for auction on May 5th in Los Angeles – and is expected to bring between $2 million and $3 million. 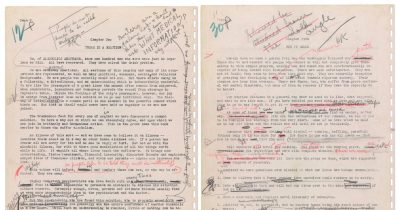 The 161-page typed document with yellowing pages – considered to be almost  scripture by some AA followers – gives the first outline of the group’s 12-step recovery program – and is filled with handwritten notes and scribbles from the founding fathers of AA.

The book is described as a “Bible to millions” that has sold 30 million copies since 1939 – been translated into 43 languages – and has been ranked by the Library of Congress as a top non-fiction book that shaped America.