The housing market last month was not as hot as a year ago, but still way up from two years ago. 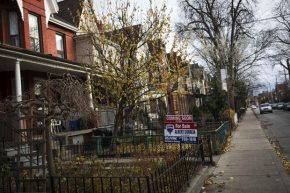 A new Toronto Real Estate Board Report says the number of residential real estate transactions in the GTA last month was down 34.9 percent from February of 2017. And the overall average selling price for February was down 12.4 percent to $767,818.

But the report also says it’s important to note that February’s average price remained 12 percent highter than the average reported for February 2016, which represents an annualized increase well above the rate of inflation for the past two years.

“As we move further into the spring and summer months, growth in sales and selling prices is expected to pick up relative to last year. Expect stronger price growth to continue in the comparatively more affordable townhouse and condominium apartment segments. This being said, listings supply will likely remain below average in many neighbourhoods in the GTA, which, over the long-term, could further hamper affordability,” said Jason Mercer, TREB’s Director of Market Analysis.

In recent submissions to the City of Toronto and other levels of government, TREB has argued that housing affordability must continue to be a priority.

“It is encouraging that the City did not include demand-oriented tax policies in its Budget,” said TREB President Tim Syrianos. “TREB believes that all levels of government need to collaboratively develop solutions to increase the supply of housing, especially the ‘missing middle’. This was noted in our 2018 Market Year in Review and Outlook Report, which calls for more ‘gentle density’, including housing types like semi-detached houses, townhouses, multiplexes and apartments.”