CHIEF SAUNDERS APOLOGIZES FOR COMMENTS, SAYS HE WAS MISUNDERSTOOD

Toronto’s police chief says he didn’t mean to point a finger at the gay village community in his recent comments on the Bruce McArthur case.

Mark Saunders told the Globe and Mail this week that “while police knew something was up with the disappearance of men from the city’s gay village, they did not have the evidence necessary to crack the case at the time and nobody was coming to them with anything about the suspect.” 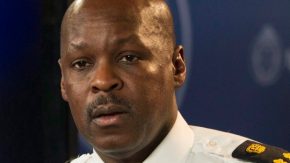 “If there’s anything I said that was misconstrued and taken in the wrong context, then I definitely apologize for that,” Saunders explained, “and I want to be clear on who I am and what I represent, and anyone who’s worked with me on investigations, I’ve never been a blame kind of person, I’ve always looked for solutions and sometimes I might provoke emotions when I look for that solution opportunity and when it’s taken away, again, I apologize.”

Saunders’ comments to the Globe prompted a chorus of angry voices from the Church and Wellesley area, who’ve maintined that it was in fact “the police” who failed to listen to them when they brought forward concerns about missing members of the community over the years.

The 66 year old self-employed Toronto landscaper was arrested in January and has since been charged him with six counts of first-degree murder.

Investigators have said they have found the dismembered remains of six individuals in large planters at a home in the Leaside area where McArthur did landscaping work and rented storage space.