The 2018 Toronto budget comes up for approval at the start of this week’s City Council meeting which begins Monday.

Mayor John Tory is facing criticism from both sides — anti-poverty, child care, shelter and other advocates who say it fails to fully fund what’s been promised, and others who say he’s spending too much money. 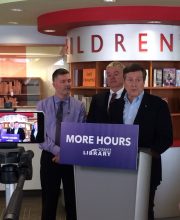 “We’ve kept tax increases affordable and we have expanded services like Sunday library which are going to help people to live a better life and help their kids to do better as well,” Tory explained Sunday from a Toronto library branch.

But Mayor Tory’s direction to freeze spending means nearly across the board cuts. Councillor Gord Perks is among the most vocal opponents of this budget, suggesting for the majority of city residents, Toronto will be less affordable because of it.

Councillors will decide on the proposed $11-billion dollar operating budget, as well as the $26-billion capital spending plan. The current ten year plan sees more than a third of all spending on the one stop Scarborough subway extension, Tory’s SmartTrack plan to add six new GO stations, a light rail line along Eglinton West and the rebuilding of the Gardiner East.

Councillors are expected to approve the budget by end of day Tuesday.