KATHLEEN WYNNE FOCUSED ON HER OWN PARTY AHEAD OF LIBERAL AGM, NOT PC LEADERSHIP RACE

With much of the focus on the Ontario Progressive Conservative Party over the past week, members of the Liberal party are about to attract some attention as they hold their annual general meeting in Toronto at the Westin Harbour Castle Hotel and Convention Centre beginning on Friday.

The next provincial election is just four months away, as hundreds of party volunteers, members and Liberal legislators from across the province take part in strategy and planning sessions for the coming vote.

Premier Kathleen Wynne delivers the keynote speech to delegates Saturday afternoon – a speech she says, that will focus on her party’s plan to win the election and not the upheaval in the PC party. 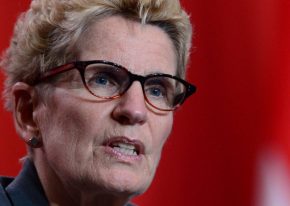 “What I need to focus on is the team that I’m part of, the team that I lead. I’ve got strong candidates, and strong members and volunteers are going to be coming to our AGM this weekend. That really is my focus,” Wynne explained when pressed about the PC leadership race.

Ontario’s provincial election will be no later than June 7th.

Meantime, there are soon expected to be two more candidates in the race for the PC leadership. Multiple reports indicate PC candidate Caroline Mulroney and business and civic leader Rod Phillips are about to declare their candidacies, in addition to former PC Deputy Leader Christine Elliot who declared her intentions Thursday afternoon, and former Toronto City Councillor Doug Ford earlier in the week.