One of the greatest trumpet players Canada, and indeed the world, has ever produced has died. Johnny Cowell was a long time member of the Toronto Symphony Orchestra 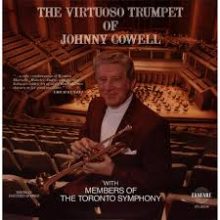 Johnny Cowell was born in London, Ontario in 1926 and was largely self-taught.

He served as a mentor and inspiration to many of today’s top trumpeters and musicians around the world.

He died Monday less than two weeks after his birthday on January 11th.

On January 9, two seats were dedicated to Johnny & his wife Joan at Koerner Hall