Ontario Premier Kathleen Wynne is shuffling her cabinet to replace ministers who won’t be seeking re-election this coming June. And as part of the shuffle to be announced at 3pm Wednesday, three backbenchers are expected to be promoted. 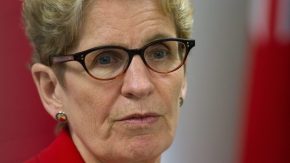 Deputy Premier and Advanced Education Minister Deb Matthews won’t be running for re-election, and there are indications Mitzie Hunter will move from education to advanced education and Indira Naidoo-Harris will take over at the education portfolio.

As for the promotions, Harinder Malhi who represents Brampton-Springdale, Ottawa-Vanier MPP Nathalie Des Rosiers, and Daiene Vernile of Kitchener-Centre are expected to be given cabinet portfolios.

The Ontario Legislature is currently on its winter break and is not due to resume sitting until February 20th. The government is expected to bring in a budget in the following weeks, and the Legislature will be dissolved no later than May 9th, when the campaign period officially begins.