We are just over 2 weeks into the new year, but a disturbing trend is developing on Toronto streets. 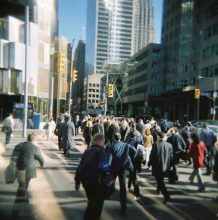 The number of pedestrians hit so far this year is up 250-percent from the same time last year.

Tuesday afternoon at 2 o’clock, Toronto Police are launching a pedestrian safety initiative called Road Safety – It Starts with You.

Toronto Police Superintendent Scott Baptist says the idea for the initiative, in conjunction with CARP, began about a week ago.

“We saw a trend that was starting and so far this year, we’ve had 7 people killed on Toronto roads. Last year, (there were) 62 traffic fatalities, 36 of them were pedestrians. This is a message that we’ve needed to talk about for a while,” Baptist explained.

The most recent pedestrian death was a 5 year old girl outside her school in the Keele and Wilson area Monday afternoon.

It was about a year ago, Toronto Mayor John Tory launched the Vision Zero campaign with a goal to bring the number of pedestrian injuries and fatalities to zero.

Older pedestrians are said to be most at risk of dying from their injuries, because they are not able to recover in the same way as than younger pedestrians.