There has been no comment from the federal government or Ottawa Police on charges against Joshua Boyle, the 34 year old Canadian man recently freed with his wife and young children after years of being held hostage in Afghanistan.

The alleged acts are said to have occurred between October 14th and December 30th after Boyle returned to Canada. The names of the alleged victims are protected by a publication ban.

Boyle and his American wife, Caitlan Coleman, were taken hostage in 2012 by a Taliban-linked group while backpacking in Afghanistan.

Coleman was pregnant at the time and the couple had three children in captivity. 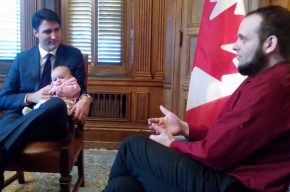 A week before Christmas, Boyle posted on Twitter pictures of him and his family visiting Prime Minister Justin Trudeau in his Centre Block office.

A spokesperson for the Prime Minister’s office would not comment on an ongoing investigation.

Boyle’s lawyer, Eric Granger, says he looks forward to receiving the evidence and defending his client against the charges. Granger also notes his client has been through a lot of late.

In a statement to the Toronto Star, Caitlan Coleman wrote, “I can’t speak about the specific charges, but I can say that ultimately it is the strain and trauma he was forced to endure for so many years and the effects that that had on his mental state that is most culpable for this.”

“Obviously, he is responsible for his own actions,” she wrote, “but it is with compassion and forgiveness that I say I hope help and healing can be found for him. As to the rest of us, myself and the children, we are healthy and holding up as well as we can.”