CANADA TO CONTINUE RESTORING DIPLOMATIC RELATIONSHIP WITH IRAN DESPITE PROTESTS

There is comment from Ottawa about the deadly protests in Iran. 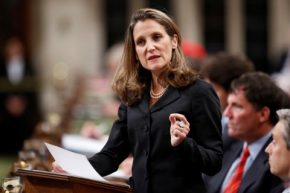 A spokesperson for Foreign Affairs Minister Chrystia Freeland says Canada is deeply troubled by the deaths of at least 21 protesters in Iran and the arrests of hundreds more.

But in a statement, Freeland’s office says Canada will continue efforts to restore a diplomatic relationship with Iran and calls on Iran to uphold and respect democratic and human rights.

Former Prime Minister Stephen Harper’s Conservatives cut ties with Iran in 2012, and the Liberals pledged to restore ties during the 2015 federal election.

The unrest began almost a week ago over Iran’s poor economy and quickly spread to cities across the country.