Yet another target has been missed by Bombardier for new TTC streetcars. 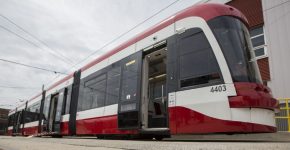 Brown says it means they have to run the older streetcars longer and will have to maintain that fleet longer than anticipated.

Back in 2009, an order was placed by the TTC for 204 of the larger accessible streetcars with the contract stipulating delivery of the entire fleet by the end of 2019. But by the end of 2016, Bombardier had supplied only 30 vehicles.

In May of 2016, Bombardier set a new target of a total of 70 by the end of 2017. In October, the number was revised to 65 and then to 63 in December. Bombardier has failed to comment on the miss while delivering a total of 57 to date.