Two New Year’s Day polar bear dips in the GTA were called off because of the poor conditions, but not even a layer of ice could stop hundreds of people from plunging into the freezing waters of Herring Cove, Nova Scotia. 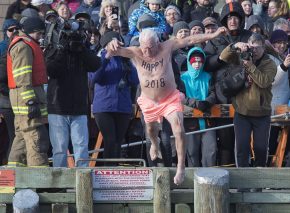 Once the water was cleared of ice, 83 year old Arnie Ross took the inaugural leap with Happy 2018 scrawled across his chest.  It was his twenty-second New Year’s jump into the frosty waters.

In spite of extreme cold warnings that cover much of Alberta, Saskatchewan, Ontario and southern Quebec, many polar bear dip events went ahead.

But just hours before it was set to begin, organizers of the Courage Polar Bear Dip in Oakville said they were calling off the event because of the conditions — the first cancellation in 33 years.

Toronto organizers had cancelled their New Year’s Day plunge on Sunday because of ice.