Hillary Clinton says “the only way to get sexism out of politics is to get more women into politics.” 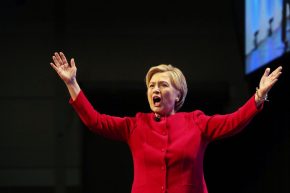 The former U.S. presidential candidate and secretary of state was in Toronto at the Enercare Centre last night to promote her new book, What Happened – her perspective on last year’s stunning loss in the presidential election.

Clinton says she’s hopeful many of the candidates for the 2020 election will be women.

“The more women we get in, the more people see there’s different leadership styles, there’s different ways of talking and approaching problem solving and that will help us normalize having women run for president and then eventually we’ll have a woman president and I hope it’s somebody I can agree with so I can support her,” Clinton said to an appreciative crowd of 5000.

As for her own future, Clinton says she intends to be an activist citizen agitating for human and women’s rights, now that she is free of the constraints of being a politician in the glare of the public eye.