The federal Liberals say they are working on a formal apology for the Canadian government’s decision in 1939 to turn away a ship of German Jews hoping to seek asylum in Canada. 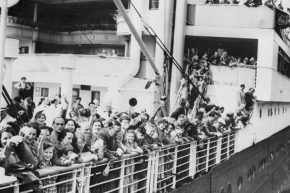 (A crowd of German-Jewish refugees aboard the MS St. Louis ocean liner wave as they arrive in Antwerp, Belgium, after wandering the Atlantic for thousands of miles. Getty Images)

“Our refusal to welcome those on board the MS St Louis, European Jews seeking sanctuary here in Canada led to the tragic deaths of 254 innocent people in the Holocaust,” Trudeau said during the National Holocaust Monument inauguration.

The ship had 900 Jews aboard when it was turned away from both Cuba and the United States before a group of Canadians tried to convince then prime minister Mackenzie King’s government to let it dock in Halifax.

The ship ultimately returned to Europe. While some passengers were taken in by Belgium, France, Holland and the U.K., about 500 ended up back in Germany, half of whom did not survive the Holocaust.

Prime Minister Trudeau met with Holocaust survivors at the National Holocaust Monument yesterday. The idea for the monument was sparked in 2007 by a University of Ottawa students who complained Canada was the only allied nation without such a monument.