Members of the Trump Administration are flatly denying that the U.S. has declared war on North Korea.

“We have not declared war on North Korea, and frankly any suggestion of that is absurd,” said White House Press Secretary Sarah Huckabee Sanders.

Her comments follow an assertion by North Korea’s Foreign Minister that the whole world should clearly remember it was the U.S. who first declared war on his country. 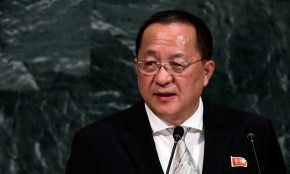 Ri Yong-ho made the comment to reporters as he was leaving the United Nations yesterday following a week of General Assembly Meetings in New York.

He also said his country has every right to make countermeasures, including the right to shoot down United States strategic bombers even when they are not inside the airspace border of North Korea.

Ri’s reference to the declaration of war appeared to refer to Trump’s assertion in a Twitter message over the weekend that the North Korean leadership may not be around much longer if it continues its threats.

The last time North Korea shot down a U.S. warplane was in 1969, during the Nixon administration, killing all 31 crew members of a spy plane that was flying off it’s coast.