Canadian literary giant Margaret Atwood joined the cast and producers of The Handmaid’s Tale on stage last night at the Emmy Awards in Los Angeles. 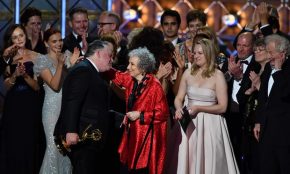 Based on her best selling novel, the television show was one of the big winners of the night. The story of a fundamentalist regime that treats women as property of the state claimed best drama, along with wins for drama writing and directing. The show’s star Elisabeth Moss also won the Emmy for best actress.

Though the show isn’t overtly political, its tales of life under an authoritarian regime struck some viewers and critics as making a statement against Donald Trump’s presidency.

Canada was also represented by Montreal’s Jean-Marc Vallee who won the Emmy for outstanding directing for a limited series for Big Little Lies.

And Lorne Michaels, the Canadian-born creator of Saturday Night Live, says the show’s outstanding variety sketch series victory follows one of the most amazing years SNL has ever had.