Did you have to go to your hospital emergency room this summer?

If you did, you faced record wait times according to the umbrella organization representing Ontario hospitals. 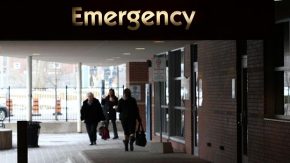 A warning from the Ontario Hospital Association says the health care system is headed for a crisis this winter unless the province takes quick action.

The statement also says conditions strongly point to a capacity crunch this winter without further action.

OHA President Anthony Dale says “many hospitals have operated through the summer under very unusual and worrying surge conditions and the evidence strongly suggests further investments are urgently needed this fiscal year in order to ensure timely access to services for patients.”

The Association also says this past July, 10 percent of patients waited longer than the provincial average of 30.4 hours to be placed in an inpatient bed from the ER.

Health Minister Dr. Eric Hoskins says while he is aware there is always more to be done, healthcare is a top priority for his government. He says that’s why the province hiked operating funding for hospitals by 3.1 percent this year for an increase of $518-million. Hoskins also pointed out his government is spending more than $20-billion on hospital infrastructure over the next decade.