BUSINESS BRAINS BEHIND YSL DEAD AT 86

The French fashion tycoon Pierre Berge, the business brains behind the Yves Saint Laurent empire and a major philanthropist, has died at the age of 86. 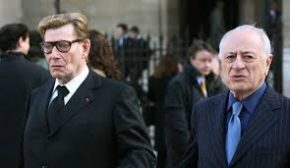 Berge was also Saint Laurent’s long time partner and the hard-headed foil to Saint Laurent’s mercurial genius.  The two turned the fashion world on its head when they set up their own label in 1961 after St. Laurent had fallen afoul of Christian Dior.

Berge was also a tireless campaigner for gay rights and donated a large slice of his fortune to AIDS research.

Berge and Saint Laurent were joined in a civil union a few days before the designer died of a brain tumour in 2008 at the age of 71.

A public memorial will be held in Berge’s honour at a later date.