ROUND 2 OF NAFTA RE-NEGOTIATIONS BEGIN IN MEXICO CITY

The second round of negotiations for a new North American Free Trade Agreement begins today in Mexico City. 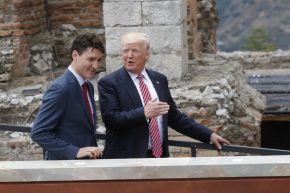 The NAFTA talks came up briefly on Thursday during a phone conversation between Prime Minister Justin Trudeau and U.S. President Donald Trump, with both said to have expressed their wishes to work out a new deal by year’s end.

At the end of the first round of talks last month, negotiators for the three countries issued a joint statement suggesting there are still major issues to settle.

Canada has announced the creation of a 10 person NAFTA environmental advisory council in order to strengthen environmental protection within the new deal.

Meantime, the host nation showing signs it’s planning for life without the deal.

Mexico’s economy minister told the Senate this week that there needs to be a “Plan B” in place, in the event the U.S. pulls out of NAFTA.

That’s what President Donald Trump has been threatening to do, but Canada’s Foreign Affairs Minister Chrystia Freeland has played down the threat as a bargaining tactic.