TRUMP THREATENS TO BAIL ON NAFTA IN CAMPAIGN STYLE RALLY

U.S. President Donald Trump is now threatening to give up on renegotiation of the North America Free Trade Agreement, after just five days of new talks. 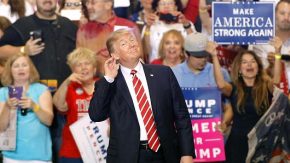 Trump’s threat is not a surprise to many observers of NAFTA talks, who have said he might deploy the withdrawal threat as a key negotiating tactic.

Mexico’s foreign minister was quick to dismiss the threat as a bargaining tool. There was no immediate comment from Canada’s Foreign Affairs Minister Chrystia Freeland.

During his rally, the U.S. President also blamed the media for condemning his most recent response to the violence earlier this month in Charlottesville, Virginia prompted by a white supremacist rally.

“They don’t report the facts, just like they don’t want to report that I spoke out forcefully against hatred, bigotry and violence and strongly condemned the neo-nazis, the white supremacists and the KKK,” Trump explained to cheering and applause.

The U.S. president acknowledged his advisers had urged him to stay on message, but that he simply could not.

Following his speech, five protesters were arrested outside the venue, after a largely peaceful demonstration turned violent when rocks and bottles were thrown at officers.