Next steps in handling the surge of asylum seekers crossing from the U.S. into Quebec will be discussed today at a federal-provincal task force meeting in Montreal, and Prime Minister Justin Trudeau will be in attendance. 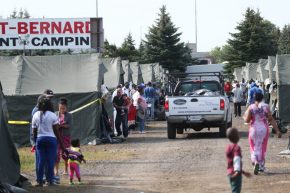 Most of those seeking refugee status are Haitians afraid of deportation from the U.S. if the Trump administration lifts their temporary protected status that was put in place after the 2010 earthquake.

Since July, more than 6000 people have crossed illegally into Quebec from New York State.

Immigration Minister Ahmed Hussen says he has deployed additional staff to Montreal to allow initial claims for asylum to be assessed faster, with the goal of eventually processing the claims at the temporary shelters and camps.