QUEEN ELIZABETH SAID TO BE CONSIDERING STEPPING ASIDE AT 95: DAILY MAIL

England’s Daily Mail is reporting that Queen Elizabeth is thinking of stepping down when the 91 year old monarch turns 95.

The newspaper’s Royal Commentator Robert Johnson says he spoken to a number of high-ranking members of the Queen’s circle who have made it clear that preparations for a transition are proceeding apace and all have confirmed that a “Regency” where Prince Charles becomes King is now a real possibility.

A “Regency” is the royal equivalent of a “power of attorney” and reports suggest the queen wants to ensure the monarchy is in safe hands should she become incapacitated. 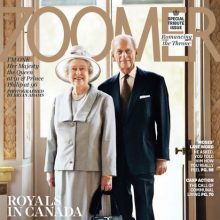 The Queen and Prince Philip are on the cover of the September Zoomer Magazine, as photographed by Canadian music icon Bryan Adams.