Highway 400 finally reopened in both directions near Highway 9 just after 12:30 Friday morning, after an 11 hour shutdown. The closure was prompted by a chemical spill which was caused by the crash of a tractor trailer carrying dangerous goods.

OPP Sergeant Kerry Schmidt says the spill of a dangerous and flammable cleaning solution onto the roadway complicated the clean up, which he says, ended up taking much longer than expected. 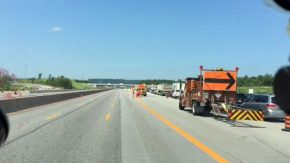 Many motorists stuck on the 400 for hours took to social media to express frustration. One woman called a local television station to talk about the kindness of strangers. She told of a woman, who parked her car, and then walked down to the highway to give out water bottles and snacks. Other local residents did the same to help the stranded.

To make matter worse, a second crash, at about 7:45 Thursday evening in Vaughan, saw a van burst into flames after it struck the rear of a disabled car in a live lane.

The driver of the van escaped the flaming wreck with minor injuries, but a man driving the car died of his injuries in hospital.