TORONTO BIKE LICENSING IDEA BACK UP FOR DEBATE, MOST TORONTO RESIDENTS WANT IT

It’s an idea that comes up from time to time, whether Toronto cyclists should be licensed and insured.

A new Campaign Research poll reveals that 60 percent of Toronto residents feel cyclists should be required to have a licence and also get insurance, similar to drivers of vehicles. The poll also found that nearly the same percentage are in favour of having more bike lanes in the city.

City councillors have looked at creating a licensing system for cyclists many times in the past, including last September, but scrapped the idea mostly due to high administrative costs involved with running it. 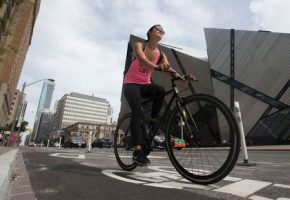 City councillors have been testing separated bike lanes along a stretch of Bloor since last year. The one year pilot project, between Shaw Street and Avenue Road, will be in place through August. The number of cyclists using Bloor has significantly increased during the pilot, going from 3300 riders a day to 4500, an increase of 36 percent.