Police raided several homes in Berlin today in connection with the theft of a massive gold coin issued by the Royal Canadian Mint that was stolen from a city museum in March. 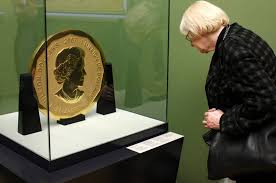 The 100-kilogram “Big Maple Leaf” coin, which is worth millions of dollars, was stolen in a spectacular heist from Berlin’s Bode museum.

The coin is three centimetres thick with a diameter of 53 centimetres and has a portrait of Queen Elizabeth on one side and maple leaves on the other.  It was issued by the the Royal Canadian Mint in 2007 and is in the Guinness Book of Records for its purity of gold.

Police didn’t say whether they found the coin or if they arrested any suspects.