JFK BACK BRACE MAY HAVE CONTRIBUTED TO HIS ASSASSINATION: RESEARCH

It seems U.S. President John F. Kennedy might’ve survived on that fateful November day in 1963 if he had not been wearing a back brace.

JFK had many health issues, but his chronic back problems caused him such pain that he underwent three surgeries and wore a corset beneath his suit at the end of his life. 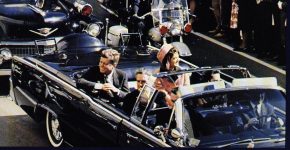 That meant that during the fatal car ride in Dallas, the rigid back brace returned the president to an upright position after the potentially survivable first shot and back into the site of the shooter, allowing the second fatal shot to the head.

Two neurosurgeons and research fellows at the JFK Presidential Library had been re-examining the former president’s old medical records — right up to resuscitation attempts at Parkland Hospital in Dallas.

Their study is published in the Journal of Neurosurgery.