A bid by the governing Liberals at Queen’s Park to raise the minimum wage to $15 an hour goes for public feedback this week. The process begins Monday starting in Thunder Bay.

It’s a move that’s prompted concern from business owners, but a group of economists favours the idea. 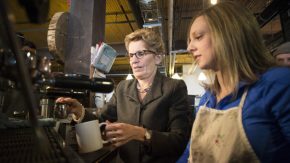 “The premier listened very carefully as we went through this, the consideration of these initiatives to ensure that for instance with the minimum wage that there was a phase-in for it, so businesses will have some time to adjust,” explained Duguid.

Fifty Canadian economists recently signed a letter in support of a 15 dollar minimum wage, saying the idea that it will kill jobs, raise prices and cause businesses to flee Ontario is fear-mongering that is out of line with the latest economic research.