Mayor John Tory has promised the city will adopt a plan called Transform TO, with a goal to cut greenhouse gas emissions by 80 percent by 2050. If approved at council, it would change everything from how buildings are designed to how Torontonians get around. 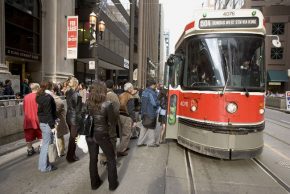 Then there’s the King Street Pilot Project – a plan to dramatically change the way King street works between Bathurst and Jarvis. The plan favours streetcar service over vehicular traffic, given 65,000 people travel the 504 streetcar everyday while 20,000 use cars.

On another issue, City Manager Peter Wallace has been asked to look into a controversial land deal involving the Toronto Parking Authority after a report by the auditor general. The TPA did not purchase the land but the AG says it risked overspending by more than $2-million in the process.

And as we reported last week, downtown Toronto is experiencing a baby boom. Councillors will debate new plans about how to make condos better spaces for young families.