British Columbia has gone from one minority government to another, after Christy Clark’s Liberal party was defeated in a non-confidence vote yesterday. 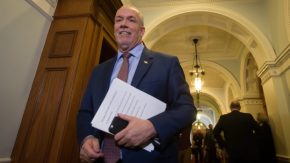 NDP Leader John Horgan was backed by the 3 Green party members to defeat the minority Liberals. Later in the day, he was asked by the province’s lieutenant governor to form government, making Horgan the premier-designate. His New Democrats will continue to have the support of the Greens, who hold the balance of power in the legislature.

As for Christy Clark, she says she offered her resignation to BC’s lieutenant-governor, less than two months after the provincial election.

Forty-three members of the Liberals were elected, while the NDP won 41 seats, with the Green Party at 3 seats.

The Liberals will now move to the opposition benches for the first time in 16 years.