Former U.S. president Barack Obama will be in Montreal today to deliver a keynote speech at 5pm to a sold-out audience at the city’s convention centre. 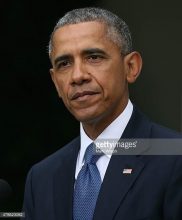 It will be his first visit to Canada since he left the White House in January.

What Obama will talk about hasn’t been revealed, but he’s been given “carte blanche” by his hosts, the Montreal Board of Trade.

There were 6000 tickets in all. Tickets for the general public sold out in less than 15 minutes.