Copenhagen’s famed Little Mermaid has been vandalized again this time by a group protesting the whale drive in the Faeroe Islands. 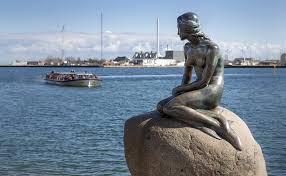 The statue, a tribute to the Danish storyteller Hans Christian Andersen, was doused in red paint in protest of a whale cull in Faeroe Islands, a Danish possession in the North Atlantic.

During the summer months Faeroe islanders are allowed to drive herds of pilot whales into shallow waters, where they are killed with the meat and blubber shared.

The Little Mermaid has been sitting on a rock at the entrance to Copenhagen’s harbour since 1913.  Over the years she’s been blown her off her perch, had an arm removed and she’s been beheaded three times.  In one case the mermaid’s head was held for ransom.