The Royal Bank of Canada office building at 20 King Street West, that was evacuated last week after an underground hydro vault fire and series of explosions, will stay closed for at least six months because of smoke damage. 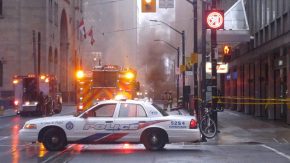 A series of blasts in the Toronto’s financial district sent people scrambling for cover along King Street West a week ago Monday.

No one was hurt, but the RBC building and sections of the underground PATH shopping concourse were evacuated during the incident.

An RBC spokesperson says workers from the bank’s offices at 20 King Street West have been moved to other RBC locations and the bank is considering renting another property for a short time.

Toronto Hydro has not yet determined why the hydro vault exploded.