The mysterious street artist Banksy’s take on Britain’s decision to leave the European Union – is expressed in his latest work.

Banksy has created a large mural in the British port of Dover – depicting a workman chipping away one of the 12 stars on the flag of the EU. 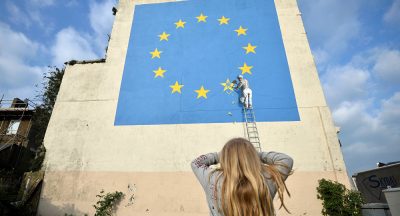 The new mural is located in the city that’s the main British gateway for traffic to continental Europe.
Banksy’s satirical public artworks have included kissing policemen and riot police with smiley faces.
They first appeared on walls in Bristol – before showing up in London and then spreading to cities around the world.

Banksy’s creations have sold for as much as $1.8 million.