Waiting a long time for a subway can put you behind schedule, but it might also expose you to potentially harmful pollution. 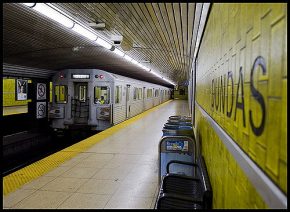 A new study out today reveals that concentrations of rail dust on the Toronto subway system are roughly ten times the level found outside TTC subway stations.

In fact, researchers say the levels are typical of an average day in pollution-laden Beijing.

The study also found that concentrations measured on the TTC subway system were almost three times greater than those discovered on Montreal’s Metro and five times higher than those on Vancouver’s SkyTrain.

Lead author Keith Van Ryswyk says the research did not measure the health effects of the pollution and cautions that the findings should not deter anyone from taking public transit. He does warn that the kind of particulate matter measured has been associated with lung problems and Health Canada guidelines advise that indoor concentrations should be kept as low as possible.

In a written statement, TTC spokesperson Stuart Green said the subway “remains a safe system for our customers and employees” and said the transit agency has been working for years to improve air quality underground.”

Green said the agency was already taking steps to address air quality at the time the measurements were collected, including refurbishing HVAC systems on its older trains, introducing new Toronto Rocket subway cars with better HVAC systems, and purchasing a tunnel vacuum car equipped with at HEPA filtration system.

Green added that the TTC plans to carry out a study this year to determine whether air quality is affecting subway workers’ health.

The research is published in the journal Environmental Science and Technology.