WORLD LEADERS RALLY AROUND THE U.S. IN SUPPORT OF AIR STRIKES ON SYRIAN MILITARY BASE

The list of nations supporting last night’s U.S. air strikes on a Syrian military base is growing.

The leaders of Italy, Denmark, Britain, France, Israel, Saudi Arabia and Turkey are among those who’ve voiced their approval of U.S. Donald Trump’s decision, which he explained last night from Palm Beach, Florida. 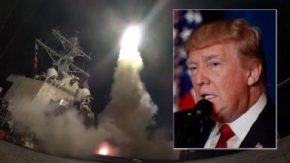 “Tonight, I ordered a targeted military strike on the airfield in Syria from where the chemical attack was launched. It is in this vital national security interest of the United States to prevent and deter the spread of the use of deadly chemical weapons,” Trump told a gathering of news reporters.

This week’s apparent chemical attack led to the deaths of more than 80 Syrian civilians, many of them children.

Prime Minister Justin Trudeau has yet to respond directly to the U.S. missile strike on Syria, but two federal departments have issued short statements. A spokesperson for National Defence says Canadian Forces personnel were not involved in the strike, and Canadian operations in the region remain unchanged. Meantime, Global Affairs says Canadian officials have “been in touch” with their U.S. counterparts.

The Syrian military says the U.S. missile attack on one of its air bases in central Syria has killed seven and caused extensive damage, calling it “an aggression that undermines Syria’s counter terrorism operations.”

The Russian military says it will help Syria beef up its air defences after the U.S. strike on a Syrian air base. Iran and China have also condemned the U.S. air strikes.