Actors Warren Beatty and Faye Dunaway were given the wrong envelope, in a mistake made by accounting firm PricewaterhouseCoopers, before announcing the best picture winner at last night’s Academy Awards. 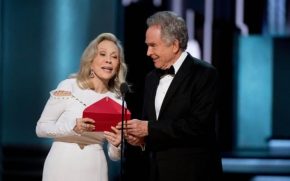 After the awkward admission that La La Land was not the winner, we learned the real winner for best picture was Moonlight.

And when all was said and done, Beatty explained to the audience what happened.

“I opened the envelope and it said Emma Stone La La Land. That’s why I took such a long look at Faye and at you,” Beatty explained to host Jimmy Kimmel and the audience, “I wasn’t trying to be funny…this is Moonlight, the best picture.”

PricewaterhouseCoopers has issued a “sincere apology” for the Oscar envelope blunder.

Earlier in the night, best acting awards went to Emma Stone of La La Land and Casey Affleck for Manchester By The Sea.

Viola Davis won the supporting actress Academy Award for her role in Fences opposite Denzel Washington, which she previously won a Tony for when she starred opposite Washington in a Broadway revival of Fences. The film is the first big screen adaptation of an August Wilson play.