A very important cinematic anniversary is being celebrated today.
ON February 14, 1992, that the story of a cable access show, first dreamed up by Toronto comic actor Mike Myers, Hit the big screen. 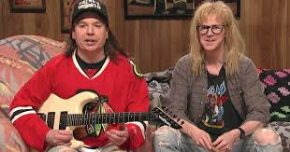 “Wayne’s World”, born in the basement of Myers parent’s house in Scarborough, remains the highest-grossing film ever based on a Saturday Night Live sketch.

The movie featured Myers and his sidekick played by Dana Carvey as they broadcast their banter about babe-a-lonians and metal gods from a cable operation in in Aurora, Illinois.

The actual city of Aurora is holding a series of celebrations, including a Guinness record attempt for the most people singing along to Bohemian Rhapsody.
To celebrate the silver anniversary of the movie’s release, Cineplex will host screenings at select locations across the country today.