The Greater Toronto Airports Authority is set to unveil plans today to add a major transit hub to Pearson Airport. 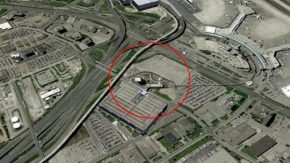 The idea is to create a hub similar to Union Station which will connect the airport to more rail and bus lines as well as serve as the airport’s main check in area.

The new renderings of the transportation hub feature one traditional car drop-off loop, but also connections with several rail lines, including the TTC, UP Express and GO Transit. Bus services, like Mississauga’s rapid bus transit system, will also connect with the hub.

There’s also more public outdoor space in the design, as well as several buildings that the GTAA envisions will feature a mix of hotels, offices and shopping.

The entire development would be built on what’s currently parking space, and take up to ten years to complete.