A tweet from Canadian Olympic swimming star Penny Oleksiak of East York may help keep some school pools in Toronto from being drained.

The City of Toronto is facing a $91-million budget shortfall, prompting Mayor John Tory to look for savings wherever possible, including potentially closing ten Toronto District School Board pools. 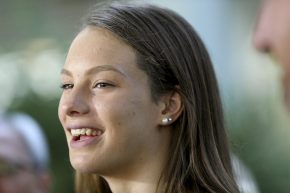 Oleksiak, who’s 16 and in grade 11 at Monarch Park Collegiate, won four medals at the Summer Games in Rio, including a gold. She tweeted in favour of saving the pools, saying “It’s important to teach kids how to swim. It saves lives and is a good physical activity.”