John Lennon’s angry letter to Paul and Linda McCartney written shortly after the Beatles broke up has been sold at auction for nearly $30,000. 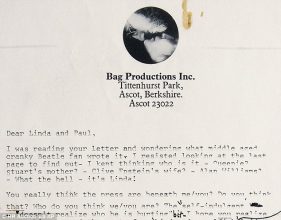 The two-page typed draft with Lennon’s handwritten notations sold through RR Auction of Boston. RR says the letter was likely written in 1971 in response to Linda McCartney’s criticism that Lennon would not publicly announce his departure from the band.

In the sometimes profane letter, Lennon rips on the McCartneys for not supporting his relationship with Yoko Ono and includes lines like, “I’m not ashamed of the Beatles – (I did start it all).”

He also adds that Paul and then-manager Allen Klein told him to stay quiet about his departure so it wouldn’t “hurt the Beatles.”

The letter has been sold to a collector in Dallas who requested anonymity.