The largest diamond discovered in more than a century is going to auction and the auctioneer says it could sell for more than $70 million. 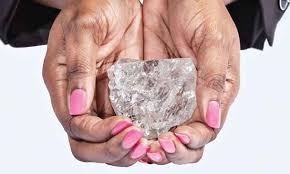 The Lesedi la Rona is the size of a tennis ball.  It was unearthed in November in Botswana at a mine owned by Canada’s Lucara Diamond Corporation.

It measures more than 1,100 carats and is the second-largest gem-quality rough diamond ever discovered.  It could yield the largest top-quality diamond ever cut and polished.

The largest diamond ever found was the 3,100 carat Cullinan diamond, unearthed in South Africa in 1905.  It was cut into nine pieces that form part of the British Crown Jewels.