It’s another award for Hamilton. The hip-hop Broadway stage biography of Alexander Hamilton has won the 2016 Pulitzer Prize for drama. 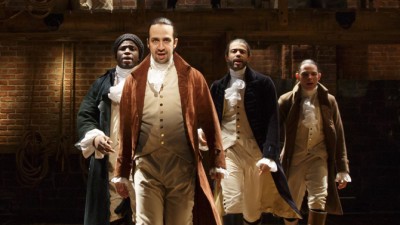 It’s the story of an orphan immigrant from the Caribbean rising to the highest ranks of American society, as told by a young African-American and Latino cast.
The Columbia University’s prize board on Monday cited Hamilton as a landmark American musical about the gifted and self-destructive founding father whose story becomes both contemporary and irresistible.

Hamilton, about the first U.S. Treasury Secretary, becomes the ninth musical to win the drama award, joining such shows as South Pacific, Sunday in the Park with George and Rent. The last musical to nab the award was Next to Normal in 2010.
Other finalists were Gloria, by Branden Jacobs-Jenkins and The Humans, by Stephen Karam.
Hamilton was a sold-out sensation this year when it debuted off-Broadway at New York’s Public Theater and amassed a $60 million US advance on Broadway. It has been cheered by politicians as diverse as Dick Cheney and U.S. President Barack Obama, and celebrities like British actress Helen Mirren, musician Questlove and many others.

The music is a mix of breezy pop, rap battles and slinky R&B. Lyrics are smart and playful, including Hamilton declaring: “In the face of ignorance and resistance/I wrote a financial system into existence.”
The Pulitzer drama award, which includes a $10,000 US prize, is “for a distinguished play by an American author, preferably original in its source and dealing with American life,” according to the guidelines.