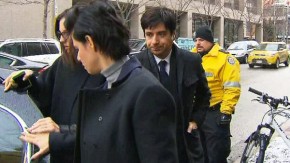 The judge presiding over his Toronto sex assault trial announced the verdict will be delivered March 24 after the Crown and defence wrapped up their closing arguments.
The Crown prosecutor said the credibility of his three accusers has nothing to do with the way they behaved after the alleged incidents.

Michael Callaghan says the law’s clear that everyone responds differently and the way complainants behave following alleged assaults should not be used to assess their credibility.

The Crown told the court each of the women reacted in their own unique ways based on their personalities and life experiences.
Meanwhile, Ghomeshi’s lawyer said the Crown has failed to prove beyond a reasonable doubt that he committed the crimes of sexual assault and choking.

His legal team said the three accusers were proved to be unreliable witnesses, who withheld information from police and even lied to the court.