COSBY CRIMINAL CASE IN PENNSYLVANIA COURT TODAY, LAWYERS TRY TO HAVE IT DISMISSED

A former prosecutor is expected to be a key witness today, when lawyers for Bill Cosby ask a Pennsylvania judge to dismiss the only criminal case lodged against him. 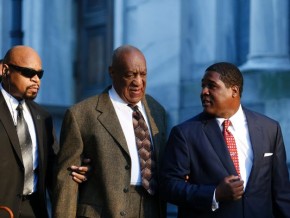 The defence says Cosby had a deal with former Montgomery County District Attorney Bruce Castor that he wouldn’t be charged and should therefore testify in his accuser’s 2005 civil lawsuit.

The 78-year-old Cosby admitted in the testimony that he gave the woman three pills before engaging in what he called consensual sex acts at his Philadelphia-area home.

Cosby’s recently released deposition is part of the new evidence that Montgomery County authorities used to file charges in December.

Castor says he made a “non-prosecution” deal with a now-deceased lawyer for Cosby but never put it in writing. He testifies today.