Rene Angelil is being honoured in his native Montreal. The husband and former long time manager of Celine Dion died of throat cancer yesterday at his home in Las Vegas. 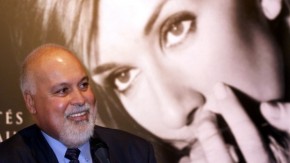 Montreal Mayor Denis Coderre said flags at Montreal City Hall have been lowered to honour the man who, in his words, “influenced the world with Quebecois music and the culture of our nation.”

There was also a moment of silence at the Bell Centre prior to last night’s game between the Montreal Canadiens and Chicago Blackhawks.

Angelil guided Celine Dion to international stardom and married her in 1994 in a glittering ceremony at Montreal’s ornate Notre Dame Basilica. Celine Dion put her career on hold to care for her husband in June of 2014 but returned to the stage in Las Vegas in March of 2015, saying Rene had encouraged her to resume performing. Rene Angelil was 73.